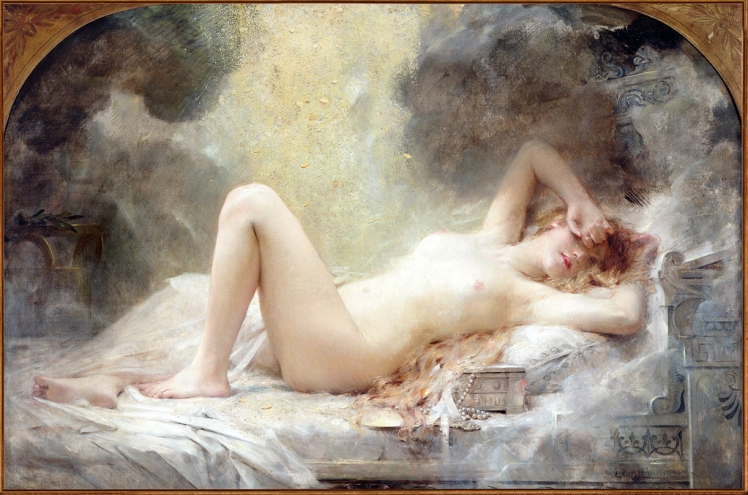 I was once told, ‘Beware of rich friends and beautiful women, you’ll end up out of your depth.’ Nonsense, the advantage of being a poet of genius is that you can meet all these folk on the same level. The beautiful woman is just delighted that you immortalise her fleeting beauty, whilst your rich friend has the funds to ensure your art is adequately funded.

But it is true, for lesser folk, this might well be good advice. I bring before you the sad case of Ingenious Trool. Young Trool was an artist; in his own way a fine one. But alas his work was constantly overlooked, which isn’t surprising since he was a painter of chamber-pots.

Nothing wrong with that you might say, but who ever really looks at a chamber-pot? Ignore the drunkard who vomits last night’s stale beer into his, or the maid who has to wash and clean it when he’s finished.

Indeed I penned a verse on the topic, so taken was I by his quandary.

When the gazunder’s gone under and is hidden away

Tis seen by the maid as she cleans

Into the bowl I pour my heart and my soul

To be pissed in and polished till it gleams

Now none of this would matter, as Trool was adequately compensated for his work. His chamber-pots sold well. A number of manufacturers competed, in an admittedly lackadaisical manner, for his services. As a general rule his craft paid better than digging ditches or hewing wood and in all candour he was generous enough. I only had to walk into a bar where he was drinking and he’d raise his hand and shout, “Tapster, another bottle, Tallis has entered the building.”

But alas for him he experienced unexpected wealth. An uncle died and left him nothing but a couple of decent jackets. Now these were excellently cut and of good material.And given that Trool was virtually the spit of his uncle, they fitted him as if they had been made for him.

Not only that but thanks to the whims of fashion, these two coats, made forty years before, were now the height of fashion. So Trool, mad impetuous fool, would seek to rise above his station.

Now it’s different for poets, we are above society and may mingle at any level. But the painters of chamber-pots really ought to know their place. As it was, dressed like a gentleman, he gate-crashed not just any event, but the Sinecurists Summer Ball! I was there at the time so I saw it, and when I saw him arrive I knew it was not going well. When you haven’t got a ticket you sweep in with a lordly demeanour as if the last thing you expect is to be challenged. Emphatically I insist that you do not cower near the door looking as if you’re contemplating stealing the spoons!

By the time I saw him, four footmen were sidling over to him and were preparing to eject him. Well I walked up to him, clapped him on the shoulder, called him ‘My good fellow’ and swept him into the ball before they had a chance to act. That, my friends, is how you enter without a ticket.

Anyway once in, I had my own work to do, my own patrons to patronise and flatter so obviously I had to leave Trool to his own devices. This may have been a mistake on my part.

What I haven’t mentioned is that the remarkably named Ingenious Trool is a very personable young man. Ladies instinctively warm to him. He is handsome enough to attract their attention and he combines it with a sort of rough-hewn manliness which seems to have them clinging to him. So long as he doesn’t mention the fact that he’s a painter of chamber-pots he can easily pass for a successful young pirate, or one of the up-and-coming generation of Condottieri captains.

Thus, inadvertently fashionably attired and inexplicably handsome, he was cutting a swathe through the ladies at the ball. Until that it is he met Carressa. She was then at the very height of her beauty and was, admittedly, stunning. She was also rumoured to be the mistress of three of the four richest men in the city.

But this painter of chamber-pots must saunter casually up to her, put a proprietorial arm around her waist and lead her to the dance floor. There, utterly smitten, he proposed marriage to her. Given that she would spend more in a day on flowers than he’d earn in a month you can see that this was not going to go well.

And yet, and yet, in the heart of Carressa, something moved. As she gazed into the eyes of this lovelorn youth, she melted enough to whisper into his ear, “Shower me with gold and I am yours and yours alone.”

Personally I wish she’d just slapped his face and had done with it, it would have been easier for all of us, but no, she gave our young fool hope!

Next morning he is there at the Misanthropes Hall demanding our attention. “Shower me with gold” was her command and he was damned well going to do it.

His first thought was that if he were to quietly reduce the quantity of gold leaf that he put round the rims of the chamber-pots he could soon acquire enough for his purposes. My calculations showed him that even if he cut the amount of gold leaf he used by half, Carressa would still be in her late fifties by the time he had enough to shower her with.

So he turned his mind to other schemes. Painting chamber-pots was obviously not going to provide the gold. It hadn’t up until now and it was unlikely to do so in the future. He could discard any idea of conveniently timed legacies. His uncle had been his sole surviving family and he could hardly be asked to die a second time.

He even considered work but I soon convinced him that the sort of money he wanted was never going to be honestly won.

So he contemplated piracy; but only briefly, because he gets horribly seasick on the Roskadil ferry.

His suggestion that he might indeed become a Condottieri captain floundered on the rock of his cowardice and utter lack of martial aptitude.

By now he was desperate.

He would paint paintings, not chamber-pots!

Yes, because that has worked so well for your fellows who are turning up in the hope of sponging drinks of you.

He would rob a usurer!

Yes that one would work, were it not for your aforementioned cowardice, innate honesty, and the fact that usurers are pretty well secured against such risks.

He would fish for the treasures in the black canal and would come back rich!

Yes if the denizens didn’t eat him first.

Three bottles, perhaps four we drank before he leapt to his feet and shouted that he had the idea. Then, before we could talk him out of it, he fled.

So what was this idea? Simple really, he’d paint a picture. So he did, on canvas this time rather than on a chamber-pot. He took two days off work claiming illness and painted it.

Then when the paint was dry he wrapped it in a blanket, put on his late uncle’s jacket and went and knocked on the door of the beautiful Carressa.

A very snooty maid finally granted him admittance. (And you’ve never met a snooty maid until you’ve met that one of Carressa’s.)

And there, in her front room, with Carressa herself sitting in bemused expectation, he unveiled his picture and showed it to her.

And damn me, but it worked.

And if you liked the story, there are others

As a reviewer commented, “This is a great collection of quirky little tales which are a spin-off from a series featuring Benor Dorffingil. Tallis is his friend, landlord, drinking companion and a jobbing poet. There are some lovely phrases used in here, as you would expect from a wordsmith like Tallis, who presents us with his pragmatic take on life. It’s an example of what happens when a minor character takes the reins and gallops off on his own. A great little book.”

3 thoughts on “Shower me with gold.”