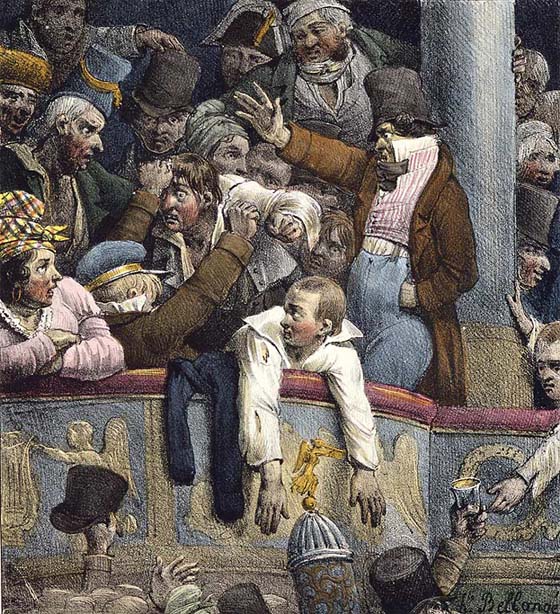 In my mind, part of being a poet is in the performance. I know that there are technically excellent poets who write fine verse who never venture from their garrets. But I feel that to get your work known you have to perform it. So I feel that a poet ought to be willing to read their own verse. Indeed I’d go further, I believe that being a poet is, in itself, a performance. You have to play the part, so that folk know, constantly, that they are in the presence of a poet.

Perhaps because of this I have often been asked to give readings in public. If the occasion is suitably remunerative I have no false modesty, indeed I have been known to present the work of other poets as well. Obviously only if I think their work can stand comparison with mine own, but frankly it never hurts to quote from one of the greats.

I suppose it was this policy of mine which lead to me being invited to give the eulogy at the funeral of Rustward Blare. As his work is still well known and held in high esteem by even the semi-literate and ill-educated, I need say no more about it, but still, I was honoured by the invitation.

His obsequies were to be held in the Ropewalk Playhouse. This splendid building consists of a central stage, surrounded by three tiers of seating, a perfect place for the occasion. I would stand next to the catafalque and deliver my oration. The acoustics are outstanding and I was guaranteed an excellent reception.

Now at this point it occurs to me that some readers may be unfamiliar with the funeral arrangements in Port Naain. In short, if one is a follower of one of the various religions, attending the temple on a regular basis, your religion of choice will deal with the matter for you. But it has to be said that none of the various temples and sects feel any obligation to provide funeral arrangements for those too apathetic in their eyes to make a commitment. I suppose you can see their point, if you’ve ignored them while you lived, it’s hard to explain why they should take any particular responsibility for you now you’re dead. Thus families have to make their own arrangements. Given that Port Naain is a very large city with a high water table few folk can afford a burial plot, and even fewer can afford the costs of proper cremation. So the vast majority of us end up on the corpse boat in a cheap shroud with a large stone between our feet. Every day the boat will sail and when well out over deep water; the crew will unload the cargo over the side. The ticket for this last journey costs a mere one vintenar, and it is considered a charitable gesture to pay for somebody else. Obviously care is taken to ensure that those carried on board are indeed dead. But you can see why it is an insult to hand somebody a one vintenar coin with the comment, “Hurry, you might miss the boat.”

Funeral rites vary. At their simplest it might just entail the family gathering round to bicker drunkenly over past disagreements before carrying the cadaver to the boat. But if you are a person of significance in the city then there is always the hope that your passing might be observed more formally. Thus the Sinecurists normally get a formal farewell in the council chamber, and for lesser lights it is usual to hire some public building for the occasion. Hence on his passing it was decided by his many devotees that Rustward Blare warranted a dignified farewell.

What I never realised when I accepted the duty of delivering the funeral oration was that his aficionados, whilst enthusiastic, were rather less generous in donations than you would hope. Thus the money collected was barely enough to hire the Theatre of the hour the ceremony would last. Now this sort of thing isn’t normally a problem. It’s just that at this point the pettiness of minor poets was displayed in all its awful insignificance. They hired the theatre for the rest of the day for a ‘five dreg special.’

Now here again I realise that explanation might be necessary. Port Naain is a large city. People have asked how all these people support themselves, and by and large it is in the manufactories of the city. For example many work within the spinning sheds and on the great looms. But these manufactories have to be powered, and these are largely powered by the great wheels. There must be hundreds of these in the city, great wheels in which men and women walk forward endlessly, providing the motive power that drives the machines. Over the years a system has arisen where each wheel will be owned and run by an independent ‘Wheel-master’. The manufactories will pay the Wheel-master for a certain amount of output a day, and leave the wheel-master to worry about the details of how this is supplied. Some will have teams of men who will walk an hour, then will be spelled off by another team, the two teams shuttling backwards and forwards for the working day. Other wheel-masters will just crowd into their wheel the destitute, the desperate and the drunken and drive them to produce the desired output. Between these two extremes lies a continuum of misery and toil. Yet by and large each method will earn the same income for the same output.

But these drudges, whether earning their living in the manufactories or on the wheels or in any of a thousand other tedious and soul crushing ways, will at some point seek relief in some form of festival. Thus the theatres and other places of entertainment invented the ‘five dreg special.’ One enters the place of entertainment and pays five dregs. From then on, until you leave, you can watch free entertainment, drink cheap drink and eat poor food that is only somewhat over-priced, and generally try and forget the utter pointlessness of your existence in wild and unrestrained frivolity.

So those minor poets who had felt themselves unfortunately eclipsed by the genius of Rustward Blare took their revenge. They booked the theatre before and after his funeral, so that for the vast majority of those present, the obsequies were merely an incidental part of the entertainment. Given that his funeral was to be preceded by a troop of rather well endowed female singers who were wearing not too many clothes, and was to be followed by a pie eating contest open to the audience (where the last one to vomit won five vintenars) I’m sure I have managed to capture the ambience.

So as the female singers gave their last encore, and exited to the rapturous, if somewhat drunken acclamation of the multitude, it was time for the funeral to begin. The coffin was carried on a catafalque drawn by a dozen lesser literary lights. This was met by baffled incomprehension from the bulk of the audience. Indeed some seemed to think it was part of a novelty race turn and they started trying to lay bets. As I entered, following the coffin, it must be confessed that I felt the entire thing seemed hopeless. I could have stood and howled my eulogy and the tumult was such that they’d still never have heard me on the second tier. But as I mounted the catafalque there was a stilling of the noise. I confess to wondering at this point whether my reputation for literary excellence had indeed penetrated even to this level of society, but alas it was not my doing. Four mendicants from the ‘Guardians of the Secrets of Soi’ had walked noiselessly down the tunnel following me and arrayed themselves around the coffin. I knew Rustward had been generous to the order in the past, but I hadn’t thought that they would attend. You don’t see many of them about nowadays, they’ve never been a popular order. Each wears a hooded robe and a silver face mask. The mask is always the same; it is the face of a pretty girl smiling. Those who join tend to be those who feel, for some reason, perhaps a diagnosis of terminal illness, that their life is over. They join the order, wear the mask, and collect money and tend to those who are dying. As they stood in silence bowing to the coffin, one at each of the cardinal points the clamour from the audience started to increase again. With this the four mendicants turned to face the audience and stepped forward to the edge of the stage. There was total silence as each started to unfasten their mask.

Now it is generally held by the ill-educated and superstitious that to see the face of one of the Guardians of the Secrets of Soi is to risk madness and death. Given that at least ninety-eight of every hundred inhabitants of Port Naain fall into one of both of those two categories, there was suddenly utter silence in the theatre. This was not provoked by a belated outbreak of respect for the deceased. Rather it was caused by the entire audience covering their faces with their garments, lying prone on the floor, or in extreme cases, abandoning their five dregs and chance of winning an ‘eat until you vomit’ pie eating competition because they had fled the theatre entirely.

It was into this silence I stepped. Obviously I was undeterred by superstitious fears. Not only that, but the four guardians were all facing away from me. I’m not sure at what point it occurred to me that one of them might glance round to look behind them, but from that point on I had my eyes closed and recited the work entirely from memory.

Still I feel that it was a splendid performance, my words echoing and re-echoing around the auditorium. It was just a little unfortunate that my fine pose and my theatrical gestures went entirely unseen. In fact everything went as well as you could have hoped for, until I misjudged the distance and tripped over the coffin to go sprawling onto the stage.

But at least nobody saw it.

If you like this story by Tallis, many others are available!

as one reviewer said

“This is a collection of stories about Tallis which go to show that it’s not all drinking afternoon tea or partaking of soirees for a jobbing poet. We discover some of his early life, some of the society feuds he became entangle with, and the story of how he met his wife and acquired the boat on which they live. Great little tales!”

3 thoughts on “A tough audience”