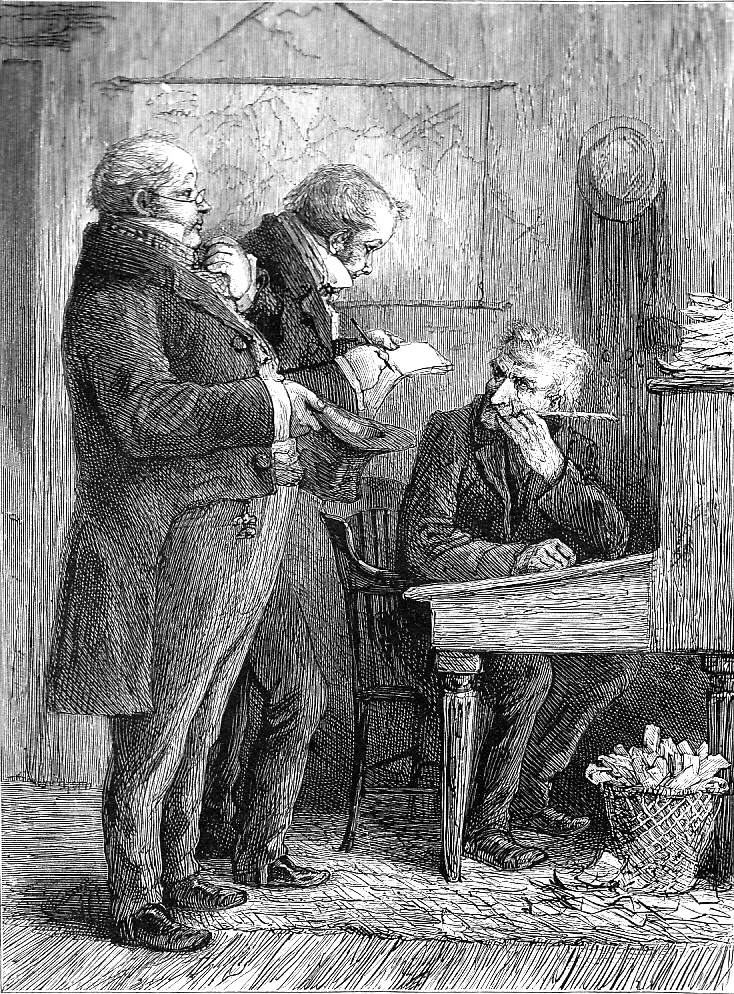 When I wrote about the Anaphora Controversy it brought back memories of other arguments within our community, and I can still see the face of Silhat Wheelbroom when he realised what I’d done.

But still I run ahead of myself. The whole anaphora business stirred up the unprincipled disarray of poetasters who are the deep cess pit of the Port Naain literary world. The result of the controversy was that a magistrate swept away some of those who had floated to the top.

But eliminate the top layer and all that happens is that others bob to the surface. In this case it was the plump and bespectacled Melton Tinkle, the slightly slimmer Felton Mortplace and the lean faced Silhat Wheelbroom who sought to dominate our art.

To be fair, they might have found it easier if they’d been decent poets. Then at least people might have taken them more seriously. Still whatever else they achieved, they certainly provoked bitter argument.

As far as I remember, it all started with a heated discussion on consonance and its place in modern poetry. To be fair it can be a useful enough tool but I can go for days without even considering it. Yet our intrepid band of three self proclaimed arbiters of poetical prowess held it up as an example of a crutch poor poets leaned on. Indeed they went on to claim that our art was being brought down and defiled by the sheer number of entirely untalented people who professed to practice it.

When I first listened to this I found myself nodding in agreement. Then I realised that their list of entirely untalented people would probably not agree with mine. After all they lacked the essential humility to put themselves at the top of the roll.

Anyway I tried to avoid all the kerfuffle, I have patrons who have to be given as many opportunities as possible to patronise me. So I avoided a lot of the arguments. Still, word of them leaked out to me. Apparently it was said that nobody should practice poetry without holding an appropriate degree first. Silhat Wheelbroom had apparently approached the Council of Sinecurists asking that unlicensed poetry be made a criminal offence. The cynic might comment that given Felton Mortplace had high office within the university, it meant that our happy threesome would be ideally placed to decide who was or was not to be a poet.

Indeed Melton Tinkle had mused aloud on the benefits accruing to those poets who had both the academic qualification and purchased a licence. With far less competition he was sure that they could look forward to extravagant incomes. Indeed he went so far as to suggest that in his bright rosy future, poets would rival usurers in both wealth and the number and beauty of their mistresses.

Finally, the Sinecurists, wise enough not to get involved in our arguments, pronounced that they would be guided by a decision taken at a meeting of all current poets. Apparently Wheelbroom had wanted it to only include invited poets, but the council had been obdurate. The plan would involve all poets; therefore all poets must be involved in the discussions.

So I pondered matters carefully, had a quiet word to friends and then made my way to the meeting.

In all candour, Felton Mortplace spoke well when he laid out the plans. He was clear, concise and persuasive. Then the discussion began. Julatine Sypent started by saying that he felt that some forms of poetry, doggerel for example, should be open to everybody. Mortplace was about to reply to this but Virisia leapt to her feet. To be fair she is more of a dancer than a poet, but still, her verse is not without merit. She asked, a little shyly, whether love poetry would be restricted to licensed poets as well?  This produced a delightful interlude where half a dozen of our lyrical poets produced extemporised verses declaring their eternal love for her. She blew them all kisses and when order had been restored Mortplace once more got to his feet.

He started by denying that doggerel was poetry, but was instead a debasement of poetry. Thus it would be one of the things stamped out by those in charge of licensing. When it came to love poetry here he rather lost the thread of his argument, perhaps because Virisia kept smiling at him.

Silhat Wheelbroom then took to the floor to rescue his colleague. “Love poetry,” he insisted, “has to be written only by licensed poets. It can then be delivered by anybody.” He paused briefly for effect before continuing. “After all,” he asked rhetorically, “should the young ladies of Port Naain have to suffer the embarrassment of having third rate love poems addressed to them?”

This produced a lot of thoughtful nods. Many felt it was a strong point. Then Bongo Veel spoke.

“So only poets who have a degree can practice?”

Sihat Wheelbroom glared at him. “Obviously. We have to keep up standards.”

“So Tallis Steelyard will not be able to practice.”

“But,” Bongo spoke slowly and carefully, as if speaking to a rather deaf or simple elderly relative, “Tallis Steelyard lectures in poetry at the University and many of those who have degrees do so because of his teaching. So are their degrees worthless because they were taught by unqualified poets?”

At this point Yale Belom rose to his feet. “Given therefore that nobody has a poetry degree because all were taught by unqualified poets, perhaps we ought to instead judge whether a poet is fit to be a poet by his or her work?”

“Or perhaps,” added Virisia, a touch mischievously, “we could just see how they handled such things as consonance and enjambement?”

This got a round of applause, and Silhat Wheelbroom rose to his feet to answer her. I also rose to my feet, and as I had not yet spoken claimed precedence and thus spoke first.

I merely delivered a simple verse.

Too fat and idle to make the damned thing rhyme.

With this I bowed to all present and left. The meeting dissolved in uproar and was never reconvened.

After all some of us have work to do.

16 thoughts on “My cynical use of enjambement”