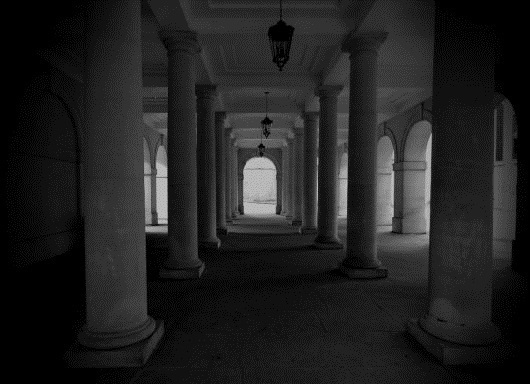 The Pillared Court in Port Naain is one of our lesser known architectural beauties. It forms part of the building that houses the Council of Sinecurists, the wealthy and philanthropic men and women who aspire to govern the city.

Obviously they need time away from the Council Chamber to ponder matters of weight. Equally obviously they cannot remain closeted in their personal offices within the building. Not only are these somewhat on the small side; but stay in your office too long and folk begin to suspect you are aloof, or even worse, plotting.
When the weather is fine, Sinecurists can walk amidst the bowers and pleasaunces of the gardens that grace the side of the hill. This activity is spiritually uplifting, invigorating and offers unparalleled opportunities for carefully planned ‘chance’ meetings and private conversations. Should however the weather be less clement, what then?
The Pillared Court was built to allow Sinecurists to perambulate when the weather is unpleasant. Somewhat more extensive than can be seen in the picture (It extends equally far behind the viewer) it was long ago decreed that use of the Court was restricted to the twenty-four leading Sinecurists. ‘Leading’ in this case means the twenty-four who pay the most to purchase various sinecures. It was felt that as these worthy individuals bore the greatest civic weight upon their shoulders, they were more in need of the solace a quiet walk can bring. Those Sinecurists who found themselves forbidden the delights of the Pillared Court were left with two options. One was to walk through the gardens in the rain, (not a ridiculous option, I have done it and some of the grottos are even more beautiful as the rain falls,) or to purchase further sinecures and dedicate more of their wealth to serving the city. As an aside, I for one feel that there are a number of sinecures to do with funding the arts which have been embarrassingly under-funded over recent years. These could do with an influx of fresh blood at their head, and fresh money to stiffen the sinews.

Still, here it is, the Pillared Court. Who knows what whispered conversations happen here, what plans are laid and decisions made away from prying eyes and ears. Indeed one saying has entered the vocabulary of the city, “As good as a whisper in the Pillared Court.”

As you can imagine, many have tried to gain access, for any number of reasons. There have been attempted assassinations! Indeed there was some thought that there should be guards stationed there to defend those using the facilities. Immediately the matter of confidentiality was raised, and it was agreed that the guards would have to be deaf mutes. This raised other issues. Where was this convenient source of martially inclined persons? Also, if they were both deaf and mute, how were they going to have their orders explained to them?

It was suggested that the Sinecurists could merely hire soldiers who had, for judicial reasons, had their tongues removed. This is a penalty that remains on the statute book but hasn’t been imposed for several generations. This particular idea was dropped when it was pointed out that cutting out somebody’s tongue before re-issuing them with edged weapons was an unusual way of guaranteeing their loyalty to you.
Technically the whole issue of guards is still under review, but as it has been for over a century and a half I cannot see anything coming of it.

It was also suggested that it would be a good idea if there was a messenger on hand to take notes to those outside the Hall, or even serve wine should one of the strolling Sinecurists feel the need of refreshment. Obviously it could not be an adult, but somebody suggested a young child, innocent and unlikely to take cognisance of anything said around them.

This idea seemed to tickle the fancy of a number of those involved. It appears that somebody had, only the previous week, seen Mutt wearing pink velvet knickerbockers and matching jacket. They had been quite overwhelmed by what they perceived as his shy innocence. This I suppose proves that you can be cunning, intelligent, make and retain huge sums of money, and still be irredeemably stupid in some things.

Because this delightful child had been seen in my presence, I was summoned in person, so the organising committee could discover the name and whereabouts of the child. Somewhat cautiously I admitted that the child had in fact been Mutt.

At this point Sarl Onwater, chair of the committee, burst out laughing. He turned to his fellow committee members and said, “Mutt! You might as well have somebody from the Port Naain Intelligencer stalking the aisles with notebook and pen in hand.”
I felt I had to stick up for Mutt here. “I think that is a little harsh, Sarl.”

To be fair to Sarl, he was not too proud to admit a mistake. “No Tallis, you’re right. Mutt recognises the value of information. Every nugget would be sold to just the right person at the best possible price.”

I nodded to show that I felt this was an accurate assessment. The committee decided at this point that they would manage perfectly well without introducing children, however charming and innocent, onto the premises.

As for Mutt, I felt obliged to tell him what had happened before he somehow found out by his own methods. Now it did worry me that he might feel some animus towards Sarl and me over this. I need not have feared, Mutt decided to accept our comments as the compliments they undoubtedly were.

and this is what reminded me of the story.  )

Should you wish to know more of young Mutt, this paragon appears in ‘The Sedan Chair Caper,’ along with a young lady who is at least his match.

9 thoughts on “Whisper it softly”