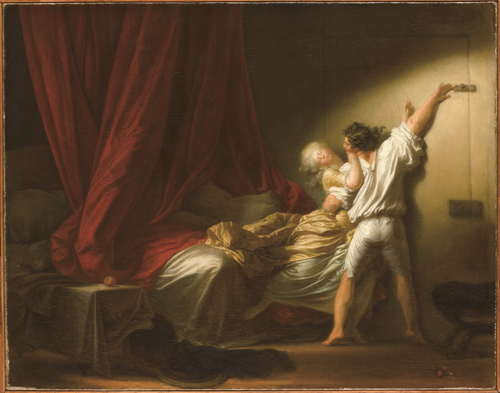 Benor woke up one morning feeling vaguely guilty. He mentally ran through the past few days to see if there was anything that could legitimately be a source of guilt, or perhaps he’d forgotten to worry about a father or husband seeking vengeance but could think of nothing.

Then he realised that he’d rather abandoned Faldon the priest. Whilst he’d been working for Gumption Silvernant he had passed along Slip Pike Lane and had seen Faldon standing outside his front door cutting somebody’s hair. Benor had thought the priest looked somewhat tired and drawn and had meant to drop in and see how he was.

He washed hastily, dressed and made his way ashore from the barge. On his way to Slip Pike Lane, he purchased some coffee. Then he purchased a loaf of bread still hot from the oven and at a butcher’s shop next to the baker’s bought some rashers of bacon, ready cooked. He borrowed a knife off the butcher, sliced the bread and stuck the bacon in between the slices and then dropped one more slice of bread into the frying pan and let the butcher fry that for him as well. He commented on the weather as he sprinkled salt generously on his fried bread. Then, as he paid the butcher, Benor winked at the butcher’s young wife, bowed with exaggerated formality to the butcher’s grinning mother, and finally left the shop in high spirits, chewing his fried bread.

Faldon was obviously not a morning person. He was still asleep when Benor arrived, so Benor lit the fire and started to boil water. The priest finally woke and clutched the mug coffee Benor passed him. “What brings you here Benor?”

Faldon sat on his bed and leaned his back against the wall. “It’s going
well.”

Faldon rubbed his face with his free hand. “I’m exorcising it the hard way.”

He noticed Benor’s surprised expression. “Anybody can use ceremonies and rituals and by and large they work, at least for a while. But if you want to get rid of one for good, you’ve got to just be there. By living the right sort of life you defeat it not once, but time after time. Each victory is tiny, but the effect of all those tiny victories is far more profound than just one spectacular exorcism.”

“Oh,” this left Benor somewhat at a loss. Exorcism was a field that trainee cartographers don’t cover in detail. As far as he could remember his course had covered the topic briefly. They’d got a list of religious orders that appeared competent and were told not to try doing it themselves.

“Still, if you hadn’t turned up, I would have been sending for you.”

“You would be? Benor was even more surprised.

“Could you be here at noon today, there’s somebody I want you to meet.”

5 thoughts on “Occasionally one has to do the right thing.”