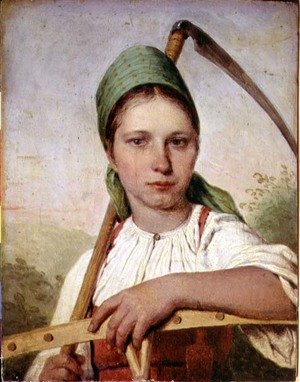 Every so often you come across a paradox. For example I was once talking to an old friend of Maljie’s and they mentioned, “The cathartic effect of mindless violence.” But surely if it’s cathartic, it isn’t mindless, it’s done for a purpose? But there again, if it isn’t mindless violence, is it cathartic? Still I leave others to ponder the eternal verities. This story arose from the time when Maljie was a Temple Warden at the Shrine of Aea in her Aspect as the Personification of Tempered Enthusiasm. The duties of Temple Wardens are countless and diverse. So Maljie wasn’t entirely surprised when she realised that one of her jobs was mowing the temple meadow.

Now if glorifying this particular shrine with the term, ‘temple’ was an overstatement, describing that particular patch of ground as ‘the temple meadow was hyperbole. Yes I know that a meadow is merely a grassy field that is mown for hay, but still this wasn’t big enough to be a field, and to be honest there wasn’t all that much grass on it. Indeed it was one of the finest collections of nettles, briars and assorted spiky and stinging plants to be found within the city boundaries of Port Naain. Unseemly Herbalists would visit at dawn and dusk, intent of getting various cuttings at supernaturally significant phases of the moon. Still when she was told that mowing the meadow fell to her, Maljie merely shrugged and went to find the ecclesiastical scythe.

Now there were problems. Firstly if the scythe had been in a working condition, it is not improbable that somebody else would have used it. But when the scythe was inspected it was obvious that the handle was worm-eaten to a terminal extent, and the blade was so rusted and blunted by years of abuse and neglect that the only way you could have injured yourself with it was by tripping over it. Maljie came to the conclusion that a score of previous temple wardens had reached the same stage as she had done in her search, had taken one look at the tool provided, and had discovered a dozen other jobs that needed urgently doing instead. Alas the situation had reached the stage where the temple either mowed the meadow or leased it out to a dark coven.
So initially Maljie wondered if she could borrow one. The problem is, this was the heart of Port Naain. In this part of Port Naain, few people aspire to a window box. (In some parts of the city even a window is an aspiration.) Obviously there were people out in Dilbrook with large gardens and teams of gardeners, but frankly Maljie hadn’t time for that. She merely walked down Ropewalk and stopped at a general ironmongers. Discovering they had a scythe, she bought it. Well technically she merely had it charged to the account of a ‘gentleman’ who had made an inappropriate comment to one of the prettier female mendicants, and scrawled across his account, “You know why,” and signed it ‘Maljie.’

She also put a stone on his account and walked back home with her purchases. Given that at the time she was wearing the long dark robe of a temple warden, with the hood up because of the autumnal chill, this did cause something of a stir.

Not half as much of a stir as was caused when she commenced to sharpen the scythe. Somebody, greatly daring, asked, “But do you know how to use it?”

“Oh yes, I learned many years ago.”

I was the person present who had the nerve to ask her just how she learned.

It all goes back to her pirate days. Now many people assume that bucanneering is all looting and plundering with the occasional walking the plank to keep up standards. But in reality, your average Partannese pirate is a man of property. Or at least the captain is. Also nobody wants to be a pirate in winter. Winter is for toasting your toes by the fire, passing round the brandy and lying competitively about your exploits. So the captain will have a large household. It includes not merely his rascally crew, but his undoubtedly rascally farmhands and sundry (rascally?) domestic servants. Indeed many of his crew will be men who at other times of year are farmhands.

So, to cut a long story short, most Partannese pirates time their voyages around the agricultural calendar. They set sail after they’ve planted their fields and one way or another they make sure they’re back for harvest, because harvest calls for every man they’ve got. So, when her piratical inamorato headed back for harvest, Maljie, like the rest of the crew, buckled down to bucolic pursuits.

Being young and fit, they tried her with a scythe. Once you have the knack and they rhythm, it demands more on stamina and accuracy than strength. She persevered and whilst she might not have been said to have mastered the art, she was good enough for harvest. Not only that but she had a decent singing voice. Now pirates live or die by their sense of rhythm. If you’re an oarsman in a piratical war galley, the beat of the drum is your heart beat. So it is with the scythe. It is cut, back, cut, back. Normally with farm workers each works at their own speed, but not so pirates. One of the scythe men would start off the chant, and the rest would take it up. The first line was when you cut, the second line when your recovered and pulled the scythe back ready for the next stroke.

So you’d cut on the Galtor and pull the scythe back on ‘sour beard.’

Well once she had the scythe sharpened as she wanted it, she gathered together half a dozen mendicants with rakes and forks. As she mowed the meadow, they would gather up what she’d cut and heap it up for burning.

It was obvious, once she’d started work and got into the swing of things, she was forty years and a thousand miles away. Unthinkingly she broke into a happy pirate ditty. This was interspersed with chuckles and even giggling as memories flooded back.

Finally the job was done, the patch was cleared, and the dead stuff was piled up. Then a splash or two of lamp oil and the heap was soon well ablaze. Maljie gazed with approval at a job well done and then slung the scythe over her shoulder and set off to walk back to the shrine. The mendicants fell in behind her in column of two’s. Without thinking she started singing again.

As they walked along singing, Maljie just kept the beat going with her shout of ‘Death’ and each mendicant in turn added an appropriate victim. All this as they shook their forks and rakes to the rhythm.

An old chap standing next to me asked, “Who’s this lot then?”

“They’re from the Shrine of Aea in her Aspect as the Personification of Tempered Enthusiasm.”

He looked uncertain. “Nowt tempered about this lot’s enthusiasm.”

As a reviewer commented, “Benor the cartographer is offered a job away from home with unusually generous pay. It all has to be done on the quiet, too. Something’s up. Benor has a murder to solve. I thought he had, but there’s more to come. This story is a murder mystery and a comedy of manners, set in a world of fantasy. If you like a genre mashup, this is brilliant. The characters and their relationships and banter would make it worth reading even if it didn’t have a plot – but it does. Another winner for me.”

16 thoughts on “Don’t let the grass grow under your feet.”