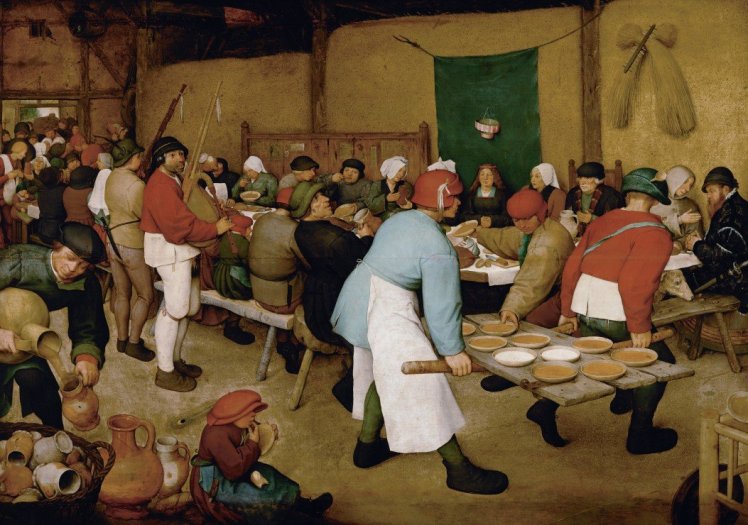 As I walked down to the town of Slipslade I pondered events. Whilst I dislike jumping to conclusions it struck me that Malinflua was obviously responsible for the missing gems, and my inspired guess was that she’d somehow passed them to Flobbard. Given his abilities I couldn’t imagine him having any difficulty swallowing them. When we arrived at the beach all was peaceful. Old Jerky had gone off to arrange accommodation and also the pies for the competition. The dancers were clearing an area for dancing and the musicians were erecting an awning which would shelter them and provide some privacy for the dancers when they needed to change their costumes. Oh yes and one thug lay on the jetty, curled up in a foetal position. I assumed he’d offended a dancer.

I assisted where I felt I might be useful and where I could contribute nothing positive, I supervised. Soon Old Jerky appeared, along with two men wearing the blue and white hooped pantaloons in the style one sometimes sees worn by butchers’ apprentices. These had come to discuss pies for the pie eating contest. With regard to accommodation, apparently Old Jerky had reserved a large upstairs room in the Big Bellied Boatman inn for us to sleep in. The rent was purely nominal because it had been pointed out to the tapster that we would be delighted if he set up a bar near the stage and sold beer to the crowds. He sent a groom with a handcart loaded with trestles for the bar and the pie eating contest.

The next thing to organise was a stage. Old Jerky and I eyed up the floating jetty. It occurred to me that if we cut it in half, nailed the two halves together side by side, and then supported them with blocks, we’d have a stage. Given that the miscellaneous rogues who had watched our arrival had departed, leaving the jetty unattended, it was obvious that no more boats were expected. So we set to work with a will and when the stage was completed, we then hung old sail canvas around the edge which entirely camouflaged its origin. I was told later that the inhabitants searched for their jetty for three days before deciding to cannibalise the stage to make a new one.  Then Old Jerky led the musicians into the town to spread the word about the evening’s free entertainment. With Nilinda and her marimba balanced securely on the handcart pushed by the sweating groom, they marched through the town, singing and drumming up an audience. By the time they returned to the stage, nobody in Slipslade could claim they didn’t know we were here.

We started the programme with singing and dancing. At this point in the evening we concentrated on volume; we wanted to get people out of the town to see us. So we played a series of bold peasant dances with plenty of drumming. Before the musicians were half way through the first dance we had the children pouring out of the gate to see us and by the time the second dance had come to its exhausting climax, there was a reasonable audience.

Given that nobody displaying visible signs of authority had appeared, I then made a formal announcement. “Good people of Slipshade, eat for free, listen and dance without ensuring that you have to avoid some lout passing a hat round for the musicians. The entertainment has been provided, free to all, by the Kastair family.” My formal duty done, and before anybody had time to ponder the implications, I announced the pie eating contest. Obviously being a contest free to enter, everybody wanted to take part. This seemed entirely reasonable, strangers offering you a free supper are too rare to be snubbed. But we tried to get the serious competitors gathered around the same table. Thus we could more easily keep a tally of how many each had eaten.

The pies were mixed, Old Jerky had whispered to me that the butcher had had his apprentices cleaning out an assortment of bins, and most pies would contain the meat of at least two of the more common species. In the interests of health, when a meat mix had smelled perhaps a little stronger than one might like, enough spice had been added to disguise not merely the taste but the smell. The butcher had been scrupulous in making all the pies visually indistinguishable so the competitor couldn’t really tell what he was about to bite into until his teeth broke the crust and released the aroma. The pies were also of a decent size. Had Shena offered me something of that size for my supper I’d have come to the conclusion she’d had a particularly profitable day in her office. Still I suppose I could, if really hungry, have eaten two. Even Flobbard, seated at the table with the other serious trenchermen, wasn’t going to be able to swallow these untasted.

I watched his technique with interest, he would dispose of a pie in five bites, and would attempt to swallow each mouthful unmasticated if at all possible. Still, by the beads of sweat I saw appear on his forehead, the spice was starting to get to him. His fellows seemed to each have their own techniques. One ate the pie in small swift bites. This process seemed to break the pie up into easy to swallow pieces. Another just ate everything placed in front of him. I was left with the feeling that had we handed him a pie on a plate, he’d have unthinkingly eaten the plate. In the end it was the gentleman with the small swift bites who won. Flobbard was defeated, mainly, I suspect, by the spice. Still it had been an engrossing competition and by the time it came to a conclusion it seemed that virtually the entire population of the town was gathered, watching. We gave the winner his prize, a single golden alar and a selection box of laxatives and emetics.

Whilst the debris from the competition was cleared away, our singer took to the stage. Accompanied by the musicians he ran through a medley of pieces. He’d done his research in the Big Bellied Boatman inn and sang a collection of sea shanties and similar, knowing them to be popular with the audience. They were, the crowd gathered more closely around us and almost shouted out the choruses. As I looked round I felt genuine pride. We were obviously a success, by the look of the crowd there cannot have been anybody left in the town. Indeed I recognised several burly louts from the castle, so it seemed they had also come down to enjoy the show.

As the music died away I noticed Darstep Balstep standing towards the back. He was accompanied by a considerable number of his men. Several of them sported black eyes and other contusions. I supposed that the search for the stones had become rancorous. He had claimed an interest in the rondel form and whilst I agree that it is a pleasant enough rhyming scheme I rarely use it. Between ourselves I feel that it fetters the artist too much. Still much good work has been done in that mode. So rather than just bursting into verse myself, I summoned Balstep to join me on the stage. I then asked him to declaim one of his favourite pieces. To be fair, he rose to the occasion and declaimed his verses well. Not perhaps as well as the applause might suggest, but his various supporters had clustered near to the stage and rather dominated proceedings. Indeed I stepped away from him, to the side of the stage. This allowed him to both accept the plaudits of his minions and also to launch into further verses.

Thus it so happened that I was perhaps the only person who was looking towards the keep above us. So I was in all probability the only person to realise that there was no banner flying from the flag pole there. I looked again, after all it was growing dark, so perhaps I’d missed it? Then I saw a banner being slowly raised on the pole, but in the dark I couldn’t see the device. I glanced towards the town, had anybody else noticed anything? Apparently they had because somebody in the town had erected a flagpole and was running a banner up that. Immediately I became nervous. It all looked remarkably like a pre-arranged signal, and I was disposed to be nervous about that sort of chicanery. I must confess I glanced round apprehensively. What else was about to happen?

4 thoughts on “Working the crowd”